We’re informed that the first arrest happened yesterday at the subject’s workplace in Westside Santa Cruz; apparently the man had previously been arrested by local police on charges of being in possession of an open container, and taking a set of pots from the sidewalk.

The second arrest reportedly happened this morning at 5:30 from the subject’s home in Watsonville. This man had been deported in 2010, and returned; reportedly he has sole custody of his two teenaged children.

It’s possible more arrests have taken place, but these two families had our red emergency know-your-rights cards with them, and thus were able to report the incidents to us. We believe both men were taken to the San Francisco Immigration Court, or the Richmond ICE detention center; we’re not sure which.

Emotional and financial support as well as legal representation will be needed in both cases.

I’m making a call to all volunteers to print red cards from our website, and distribute them widely where you live or work, where you go for lunch or dinner.

I’m also asking everyone to be on high alert, to help resist these incursions by federal agents into our Sanctuary territory, taking prisoners among some of our most vulnerable neighbors, splitting families apart, and sending waves of fear throughout our immigrant communities. We need to stand as one in solidarity, in every neighborhood. Santa Cruz is a Sanctuary city in a Sanctuary county; we shouldn’t allow this to happen without determined resistance. 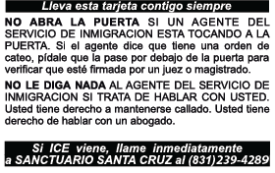